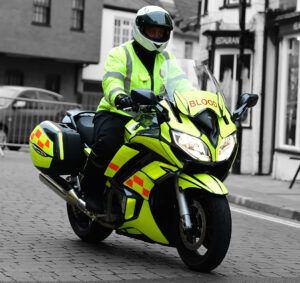 What are Blood Bikes?

Blood bikes have been running in some parts of the UK since the late 1960’s. They provide an out-of-hours courier service transporting essential medical items such as blood, pathology & microbiology specimens, medical notes, pharmaceutical products and donor breast milk between hospitals and healthcare facilities. This service is offered completely free of charge.

The main aims of Blood Bikes are:

The Nationwide Association of Blood Bikes

Currently there are 32 county based Blood Bike member charities of the Nationwide Association of Blood Bikes (NABB), which cover almost every area of the UK supporting their local hospitals to deliver blood and other essential medical supplies every night and all day at the weekends and bank holidays. The data now available shows that 2017 was by far their busiest year so far.

The NABB member groups cover the UK, now with over 3,000 volunteers riding, shift controlling and fundraising to keep the fleet of 260 liveried blood bikes and cars on the road. The rise in jobs carried out reflects the activity that has seen the number of NHS Trusts and Health Boards etc rise from 87 to 141 and the 135 other NHS sites and hospices increase to 179 as well as an increase in the number of air ambulance services supported to 14. Member groups now utilise more than 50 cars and vans which ensure we can keep the blood flowing through the depths of winter